Last Saturday was BCET’s last regular show of the 2013-2014 IHSA season. This show was back in Connecticut for the regionally hosted show, meaning that all the teams would contribute and help the show run smoothly. Becker was designated to help hold horses for the day, not a hard job for a horse-crazy team. Because this was a show put on by the region and not just one school, it allowed for a large limit of riders who could show per team. This was great news for Becker, as we ended up with a rider in almost every class! It also gave a few of our riders a chance to ride in their new division and prepare for Regionals next weekend!

My first class of the day was Intermediate Fences. I drew Austin, a grey gelding who had been pokey and a little sticky over the fences in the previous classes. Luckily, one of our other riders rode him in the class before me and she seemed to get him going forward on her course, so I was hoping I could do the same. For someone who is usually a nervous jumper, I felt completely relaxed as I mounted up. Maybe it was the fact that my team was in the horse holding area, so I was surrounded by friends. I was more than thankful for the laughs and good luck wishes my team gave me as I entered the ring with a smile on my face and no nerves to be found. Our first fence was a little sticky, much like Austin had been for the riders before the previous class, but he easily moved up to the second and third fences, both of which were oxers. Next was a bending line with fences four and five, which we entered with a short spot but recovered on our exit. The last two fences were set up as if on a circle, so we were to jump fence six and take the inside turn to fence seven. This is where I realized Austin’s severe left drift. We took fence six a little to the left, drifted out on our turn, and took fence seven from a short spot and almost on top of the left jump standard. As I trotted out, I was crossing my fingers that the judge would go easy on me. He must have because I placed second out of seven riders.

Next up was Intermediate Flat. Again, I drew a horse that one of our other riders was riding in the class before me. Liaison was a bay gelding who moved like a classic hunter. As I watched our rider before me in her class, I could tell that he was going to be some work and that his sit trot looked anything but comfortable. As she and my teammates helped me mount up, she only confirmed my thinking. I also learned that he was a bit of a grump with his ears and absolutely loved to grind his teeth (which I did everything in my power to not laugh at throughout my class and I could hear my team laughing at him from the side of the ring every time I rode by). Minus the teeth grinding, my class went well and I placed third, which I thought I deserved. 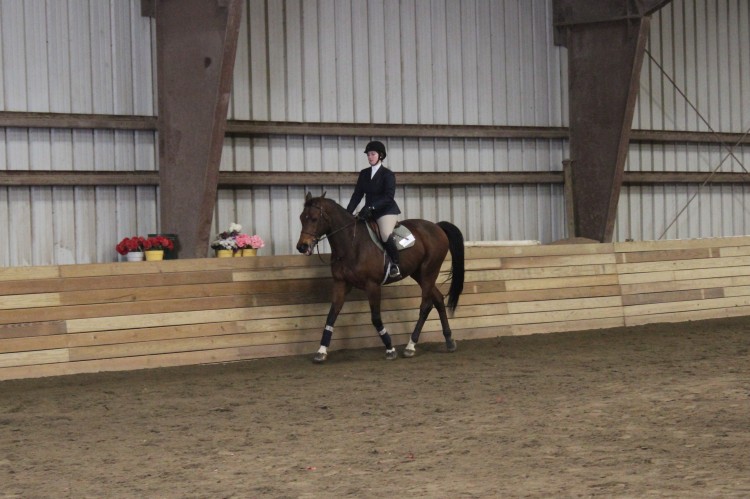 BCET ended the day with 7 firsts, 5 seconds, 6 thirds, 1 fourth, 2 fifths, 1 sixth, and a tie for third high point team! I couldn’t be more proud of my team in our last regular season show! Our next stop? REGIONALS!