When I started this show season, my only goal was to have a “learning curve year” after being out of the show ring for a bit. Ax and I have definitely had our fair share of struggles—in fact, lately it has felt like more struggle than success—but we have also had a decent amount of success. Enough to put us close to qualifying for finals.

After our last show I found myself looking at the point list and seeing Ax’s above the cutoff for hunters and my name only four points away for the Modified Adult Medal. The original plan was to do the circuit’s spring opener and summer festival before finding miscellaneous shows that were closer to us to round out the year. Once I found out that we were relatively close to qualifying for finals I threw a wrench into that plan and convinced my parents to take us to one of the circuit’s one-dayers to get our last few points.

I was feeling pretty confident going into the show—I was only going for our four points in the medal plus a few more in the hunters to keep us above the cutoff and we would be done by ten thanks to all my classes being in the morning. We hadn’t jumped too much since the previous show but our ride that Friday and the morning’s warm-up were perfect.

Our first two over fences classes, the first hunter and stake, were a mix of good and bad. The were simple—the typical diagonal-outside-diagonal—and our single fences were nice with good distances, but on the slow side for hunters. We added in all the lines (no surprise) and I was mostly just being a passenger instead of a pilot—we had a few icky fences and a few swapped leads behind. Ax was great, I was just riding like a potato. (Note to self: More leg!)

The two flat classes both went really well. After a short under saddle class and an excruciatingly long equitation flat class, we placed fourth in both. I had acquired a curse of not placing in the equitation lately, so I was pretty happy to snag a ribbon in a decently large class—especially after having to do too many laps of sitting trot.

The equitation over fences class was our best. The course required a little more thinking on my part with a half circle of fences, rollback to a single oxer, and a diagonal then an outside line. Even though we added in the lines, we had a nice consistent pace and hit all of our distances…until I asked for a longer spot to the final line and we made the biggest chocolate chip ever. It was a class of about ten, so that chip cost us a ribbon. I’m pretty sure I left the ring laughing because god forbid I get an entire course right.

Our final class was the medal and thankfully it was small, so qualifying was basically guaranteed as along as I didn’t fall or go off course. Though it’s not an excuse for our less than stellar round—it was our worst course of the day—but at this point we were both exhausted and ready to be done. In the end, we took third and got more than our required four points. 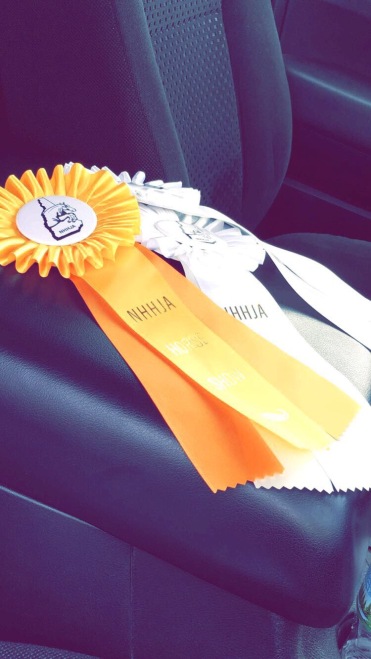 The show was a bit of a bust (thanks to me) in terms of getting more hunter points to solidify our spot, but ten more is better than zero. I won’t know for certain if we made the cutoff until after the circuit ends, but we are definitely in for the medal.

So, I guess now we get ready for finals!