Does anyone actually not like Instagram? While I’m not into the whole “theme” thing that people are doing, it is easily my favorite place to share my photos of Ax and for some reason a bunch of you lovelies follow me—which is cool, you rock! 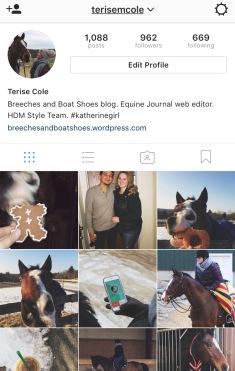 This app has been around and on my phone forever—I did a review on it way back in 2014! I still find it useful for blanketing Ax in the winter and while I don’t always agree with the suggestions, it is always nice to see what it has to say when I am undecided.

How did no one come up with this idea sooner? Say goodbye to saying “Excuse me, I can’t see the course!” and say hello to your new favorite way to remember courses. I am itching to get back to showing so I can really put this app to the test, but so far I love it for schooling courses at home!

Most of the videos anyone takes of me includes Ax’s annoying snorting or some sort of unneeded sound in addition to some riding that the world doesn’t need to see. Cameo is by the same people as Vimeo and is by far my favorite video editing app on my phone to cut out that corner that we broke in right before the jump.

I have so many photos of Ax on my phone that there is no room for music storage, plus I hate buying a song when I am inevitably going to listen to it too much and start to not like it. I love Spotify because: 1) I don’t have to buy songs, 2) it comes with the best pre-made playlists, and 3) it doesn’t eat up my phone storage. Plus, it makes my nights at the barn alone feel less like I’m all by myself and there is a creeper around every corner.

This is the cutest idea. I first heard of it when $900 Facebook Pony talked about it and while Ax doesn’t have an issue putting his ears, it is tough to get his attention away from whatever he is currently eating. This works like a charm.