As this year comes to a welcoming end, I can’t help but look back at my year and be grateful about how much horses have been present. This has, by far, been my horsey-est year yet. So, without further ado, I give you my horse filled year in pictures.

February picked up a bit, as we moved the horses to a new barn. My saddle finally got some use when Angel-pony decided that the indoor arena was terrifying and everything in the corners were going to eat her.

March put me back into IHSA to finish off the season. With three shows left, the pressure to qualify for Regional Finals was mounting. Finally, at the last show before Regionals, I won High Point Rider and qualified for Novice Flat. IHSA Zone 1, Region 1 Finals were held at Mystic Valley Hunt Club in Connecticut. After getting called back for the second cut of the class, I drew a lazy horse named Tucker who was not about to play the game of an Equitation Test and I placed sixth. Not enough to qualify for Zone Finals, but enough to push me to prove myself the next season.

April brought our Equestrian Team banquet, where I was named a captain for the 2013-2014 season and won the Most Improved Rider award. It was a great surprise to end the season. This month also brought the presence of a new horse in my life, Axcent. I had already been planning on going to Martha’s Vineyard for the summer when the proposition of leasing Axcent came up. I had my first ride on the goofball and promptly fell in love with him. This caused for a lot of planning and crossing my fingers, wishing for the best of both worlds.

May was the beginning of many months of horse overload (in a good way). I began my lease of Axcent for the summer, and after four rides on my one week old lease, we were off to the NHHJA Spring Show. This may not have been the best idea, but it was a great experience. Having only jumped the beast twice and never shown in the NHHJA circuit, I went to the show planning on showing strictly on the flat. He was perfectly behaved and took good care of me, even when we entered a medal class as a filler and I was shaking in my tall boots. This month also had Angel’s 15th birthday. My little pony is getting old!

The month of June brought me to Martha’s Vineyard for a summer of adventures at Arrowhead Farm and The Black Dog. My first adventure was bringing two horses, Shawnee and Nick, to the beach for a scene on ABC’s The Vineyard. The rest of my days were full of galloping through fields, jumping over cross-country logs, teaching lessons, and pony camp. It was just the place I wanted to bond with my new horse. Ax and I also found ourselves going to a small MVHC Show at the end of the month. It was my first real over fences show with him and where he earned his nickname of Prince Charming. June was the beginning of an amazing summer that I will never forget. 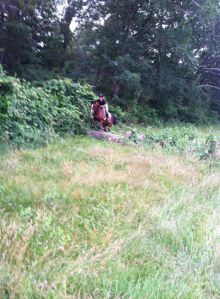 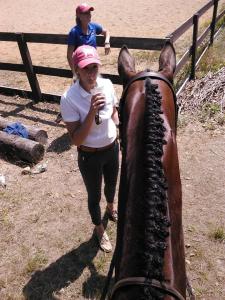 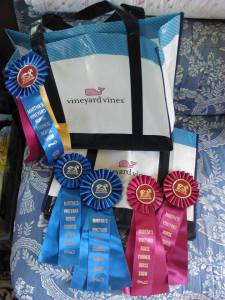 June melted into July quicker than I wanted. This was my second, and last, full month on the Vineyard. The 4th consisted of campers painting one of our horses, Ricky, in patriotic colors and parading around the farm. July was also the hotter month on the island, so we often took the campers swimming in the pond on Nick, or hiding from the sun in the indoor while vaulting on Shawnee. Like most outdoor rings, the large sand arena turned into a desert, so Ax and I spent most of our time together riding the trails and fields surrounding the farm in the early morning or late afternoon. All the hills in the trails must have done some good, because this was the month that I started noticing a real difference in the Prince.  July was full of large camp sessons and lessons until dark, the heat definitely didn’t turn away any riders! 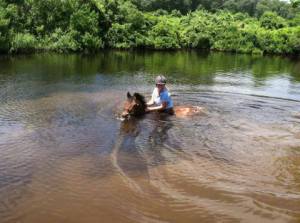 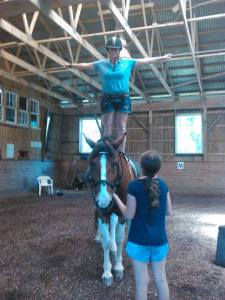 August was bittersweet for me. It was a month I was dreading. August meant my last month with Ax, leaving the Vineyard, and going back to school. On the 9th I said goodbye to all the amazing people I met and worked with while on the Island. I left with memories, friends, and experiences that I will have forever. Although the beginning of the month was sad, the middle turned it around. After the last month of stressing over what would happen with Ax at the end of the summer, I got some good news. On the 15th of August, Southern Axcent became mine. I had an unbelievable summer, and now I had the horse of my dreams with a fairy tale ending. 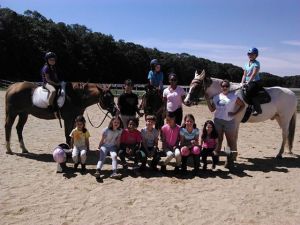 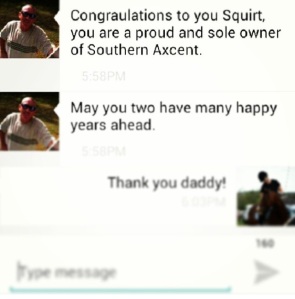 September was calm compared to the previous months. On the first of the month, Ax came to Becker, ready to start our next adventure together. A few days later, I decided to go out on a limb and start my blog with a post about mermaids, horses, and bad handwriting. A couple days after that, Ax and I had the opportunity to ride in a clinic with Torrance Watkins, an Olympic event rider (read my post about the clinic here). September also brought the start of the Fall IHSA season, my first season as one of three captains, and a chance to blog about all about my IHSA experiences. 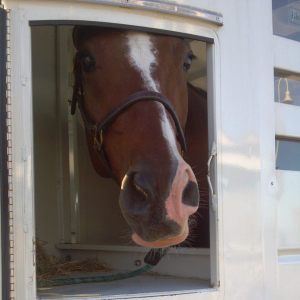 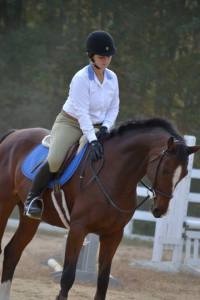 October came with a nice chance to relax from my crazy horse life and focus on classes. Between being an RA, taking 7 classes with 19 credits, riding on the Equestrian Team, being a captain, and having Ax at school, I was busy to say the least. BCET put on our home IHSA horse show and Ax was used in the upper level flat classes. Everyone loved him. IHSA continued, Ax got his first hunter clip, and I was already ready for winter break.

With November came the cold weather. The last few warm days consisted of IHSA shows and trail rides. The fall season of BCET came to a close this month with my first 1st place over fences this year and qualifying for regionals in Novice Fences. With IHSA finished until after winter break, I had more time to go home and ride my Angel pony, as well as gain some confidence on other horses. Oh yeah, and I GOT PUBLISHED! Horse Junkies United shared one of my blog posts after I submitted it a few weeks before. You can read the post here! 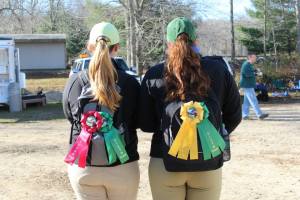 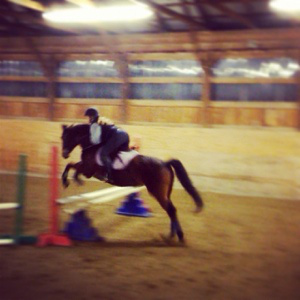 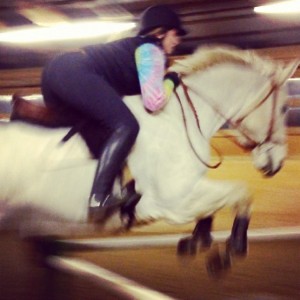 Between the freezing weather and holiday preparations it was difficult to get a chance to ride this December. But fear not! This was the month of taking pictures of the horses…just about every day. December started with my first fall off the beast followed by a small jumper show at UNH where we placed 4th. Next came more photo shoots with the ponies in Santa hats and the fresh snow.

2013 turned out to be the year of the horse, for me anyways, and I can only hope that 2014 brings the same. I am ready for another year full of horses and new adventures. I don’t know what will come this year, but I am ready to blog about all of it. And I can tell you one thing, my first kiss of the new year will be planted right in the middle of Ax’s muzzle.