Ax has had the same 180 gram turnout, an ugly, red plaid no-name brand, since I got him in August of 2013. It used to fit him well, but as he filled out, it started to get wonky in the chest and just wasn’t looking so hot after four years. I am happy to report that Ax finally got a new medium, the Kensington Signature SuperMesh Medium Weight Turnout, and he looks adorable in it.

Upon seeing this blanket in person, my first thought was, “Wow, this is bright!” All my blankets don’t match by any means (I am more likely to just buy what has a better deal), but this blanket is definitely a vibrant venture into color compared to my preferred shades of black and white.

Once I opened it up and pulled it out, my second thought was, “Wow, this is stiff!” Unlike a normal blanket, the outer shell of this is Kensington’s 1000 x 2000 Denier Textilene®, which they list as woven, PVC-coated, polyester fabric that makes the blanket super durable and tough. Thankfully, after a few wears it settled onto his body nice and it no longer stiff.

My third thought was how nice the quality felt—this blanket wasn’t cheaply tossed together like Ax’s old one. The Textilene® made it feel durable and waterproof, the fill felt nice and fluffy, and all of the buckles felt sturdy. 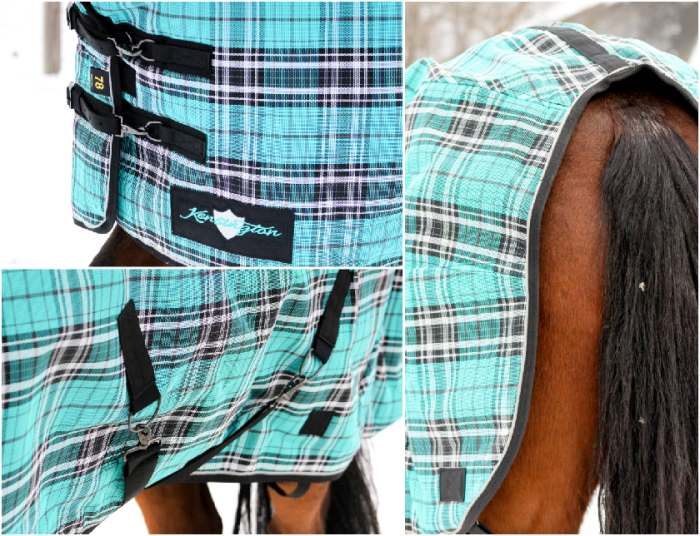 Though this blanket has a ton of features, my favorite is the padded withers. If you’ve ever seen a photo of him, then you know that Ax’s withers are massive—this can make finding blankets that don’t rub on them a bit difficult, and I usually have better luck with high-neck cuts. The wither portion of the Kensington blanket is so padded that rubbing hasn’t been an issue at all!

I am also a big fan of the snaps in the front as opposed to traditional buckles—so many blankets are adding this feature and it makes blanketing so much faster—and the removable belly guard. I do sometimes worry about his belly being cold since it is clipped all winter and unprotected in most blankets, but the belly guard eliminates that.

Another thing of note is all the detachable parts of this blanket—the leg straps, belly straps, and tail flap are all removable—allowing you to customize it to your needs. I pulled the tail flap off right away since Ax mostly just gets poop all over it anyway. The belly straps easily unsnap on both sides, so now I can pull them off when I toss the blanket on him to walk down to the indoor to ride, and they won’t swing all over the place.

I won’t lie; I was a bit nervous about a medium without shoulder darts, so one of the biggest surprises of this blanket is how well it fits Ax’s weird body shape. Between his narrow chest, big shoulders and barrel, massive withers, and short length, Ax isn’t the easiest blanket fit. The Surefit® Cut, as Kensington calls it, is designed to fit a wider range of horses, and it definitely fits Ax well—he was extra rambunctious after being off for two months and it didn’t shift through all of his shenanigans.

Kensington’s Textilene® fabric makes this blanket incredibly tough. Ax isn’t a blanket destroyer (though he does get into a weird habit every now and then of biting the chest and pulling on it) so I am not sure if he has put the durability to a full test, but I can’t imagine this thing ripping even if he wanted it to. The PVC-coated fabric is so tightly woven that it is very armor-esque over the rest of the blanket and waterproof.

Overall, I really like the Kensington Signature SuperMesh Medium Weight Turnout, and I am so happy to be rid of Ax’s old 180 gram. And I, the girl who prefers her color scheme to include different shades of white and black, can’t get over how dang cute he is in teal plaid.