My most recent work trip took me to the AETA International Trade Show in Pennsylvania, but it also took my wallet on a trip to I’m Now Broke City, USA. In between grabbing business cards for work and putting out magazines, I managed to do a little splurging at the booths—oops!

This beauty was my first purchase of the weekend. After eyeballing the James River since I got my Camden Crossbody in 2016, I couldn’t resist when I found out that one from the hunter/jumper collection was in Tucker Tweed’s seconds sale and it was in the color I wanted—it was meant to be!

A little goodie bag from one of my favorite small-but no longer actually small-businesses? Yes please! I was super excited to see Hunt Club and its lovely founder at the trade show after meeting her at the Kentucky Three-Day earlier this year. Plus, I snagged this cute tote with Hunt Club goodies inside at the same time!

While wandering around the booths, I walked by the Unbelts booth and mentioned that I had heard of them on social media. The woman gave me one to try on and literally told me to walk away with it on. Though I am religious to my ACE Equestrian belts, this one was thinner and a little easier for my breeches that don’t have 2″ belt loops.

My biggest and most exciting purchase of the weekend was this stunner. While I had no plans of buying a helmet, I’d been needing (and mostly wanting) a new one since I busted my old Samshield in 2016. When some of the first words out of the rep’s mouth were “sale,” I died and went to helmet heaven. They just so happened to have the rose gold Miss Shield—the exact helmet I’d been lusting over for months—in my size and it was the last one the rep found to show me. The rest is history. 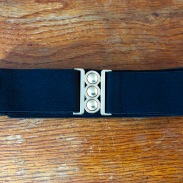